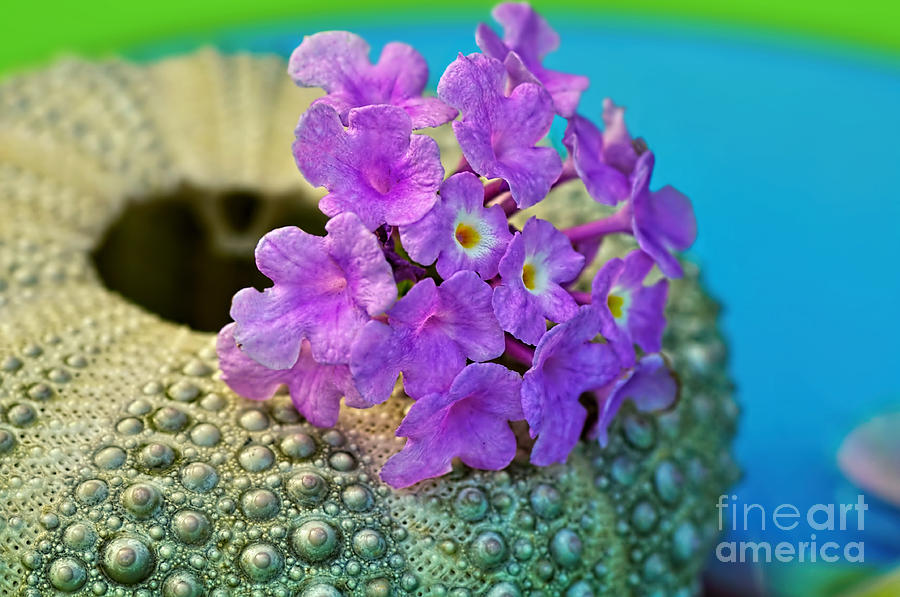 Flowers on a Shell by Kaye Menner

Flowers on a Shell by Kaye Menner

Sea urchins or urchins, archaically called sea hedgehogs, are small, spiny, globular animals that, with their close kin, such as sand dollars, constitute the class Echinoidea of the echinoderm phylum. About 950 species of echinoids inhabit all oceans from the intertidal to 5000 m deep.

The shell, or "test", of sea urchins is round and spiny, typically from 3 to 10 cm (1.2 to 3.9 in) across. Common colors include black and dull shades of green, olive, brown, purple, blue, and red. Sea urchins move slowly, and feed on mostly algae. Sea otters, starfish, wolf eels, triggerfish, and other predators hunt and feed on sea urchins. Their roe is a delicacy in many cuisines. The name "urchin" is an old word for hedgehog, which sea urchins resemble.

Many thanks Kimberly :) Sent a couple of L/F's your way.

the colour is gorgeous, and the urchin pattern gives it a touch of fantasy.

Love the colors and detail of this image, knowing these flowers are so tiny. Nice macro work.

Congratulations on being featured in the Fine Art America Group "Images That Excite You!"